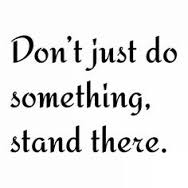 One of my first kids was initially brought to AidChild covered in wounds—the beating kind.  Nearly every inch of his little body had been abused.  We don’t know his date of birth, but he must have been six or seven years old.  It was truly awful.

Like all of my kids, he quickly rebounded, and seemed to even flourish.  That said, he did have frequent anger issues.  And when he would become extremely frustrated (with minor, everyday disappointments or struggles), he would stand at the edge of our hill, and yell at the top of his voice.  A terrible, awful war cry.

Each time, I would try to calm him, comfort him, and quiet him.  But it didn’t work.  He would just shout all the louder.

Finally, unsure of what else to do (and I believe that I was responding to a prompting from Someone greater), I decided to join him.

I stood at his side, looked out over that hill, and let out my own war cry.  “I don’t know what we’re yelling at,” I told him, “but I am right here with you.”

Soon, peace came to us both as we stood there.  And shortly thereafter, he responded to frustration and disappointment in more healthy ways.

The cries were no more.

I shared this story in a class today, and the professor said, “Sometimes, we need to tell ourselves, ‘Don’t just DO something, STAND there!’”

Often, simply being present with another in their time of need—even when we don’t “get” it, comprehend it, or fathom it—can bring about tremendous health and change.

We don’t have to connect intellectually in order to be of support emotionally and spiritually.

So the next time you’re at a loss for what to do in the care of another, don’t just do something, stand there.

9 comments for “Don’t just do something, stand there. (A 1-minute reading.)”