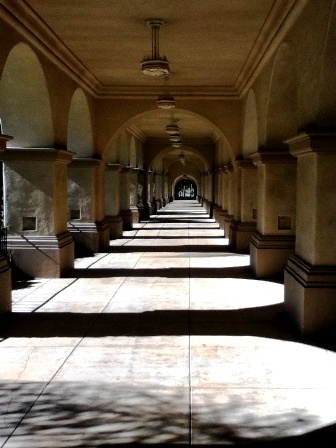 One of the many pics I have taken in the park.

What a privilege (in every sense of the word) it is to be able to so often jog through the magnificent Balboa Park.

Today, I first encountered a string quartet on my jog.  Four talented young people who had informally positioned folding chairs facing each other, as they do, graciously offering Christmas Carols for any who chose to gather.

Next, a tarot card reader, in her extraordinary purple outfit and jewels.  She had set up shop under an umbrella of similar color and adornment.

Then, a quiet man sat behind a small table covered in pamphlets.  His sign read simply, “Baha’i explained.”

The next such person I jogged past was “The Sleeveless Magician,” entertaining park-goers who had formed a perfect semi circle as they clustered to see his tricks.

Then, an artist was drawing caricatures “in less than five minutes.”  His sign also indicated that donations were accepted.

Near the end of the long corridor they call “El Prado,” stood a group of six young men skillfully performing Mexican Ranchera music.  Two of the men played violins, one played a trumpet, another a guitarrón, another a guitar, and the last one was playing another small lute.  (On my return, I noticed that they were taking turns to step forward and sing in the unmistakable style of the genre.)

As I reached the halfway point of my jog, and rounded the fountain in front of the Science Center, there was a older man playing saxophone, his tattered case propped open, collecting loose change and dollar bills.

Now, keep in mind, today was not a special festival-day in the park.  It was just another day.

The reality caused me to be struck anew by the beauty of the human spirit, of how it longs to express itself, sometimes solo, sometimes in concert with others through diverse and cherished, often sacred ways.

All the more so when unencumbered by poverty, political control, or a complete lack of opportunity, awareness or exposure.

I am wildly blessed to regularly have this experience here and abroad, and I again pledge to work as hard as I can so that others might experience what it means to have voice–and to hear the voices of so many others.

When I fathom what it would mean if every human spirit could choose and own the unencumbered expression of their souls, I am at once inspired and dismayed.

How is it that this is not already so?

← “So, should she NOT have done that?” Balancing the setting of intentions and being present.
The Pope behind the Pope of the Year: Paving the way to change →